The non-annotated version of this article is at Autorack 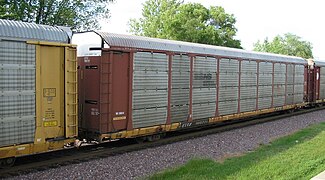 An autorack. The platform of the pictured car (the bottom strip of yellow and everything below it) is owned by TTX Corporation, while the rack (the parts above the platform painted dark red and silver) is owned by Norfolk Southern.

An autorack, also known as an auto carrier, is a specialized piece of railroad rolling stock used to transport unladen automobiles (unladen in this context refers to automobiles without passengers).

It is widely used to carry new automobiles and light trucks from the factories to automotive distributors. It is also used for Auto Train service in the United States.

Check source to see how to move content box (toc) to the right side ...

In the early part of the 20th century, when automobiles were still new technology, their production levels were low enough that they could be shipped in sufficient quantities in boxcars. Two to four automobiles would usually fit into one boxcar. But as automobiles grew in size, railroads found that they needed to modify the boxcars for more efficient loading. Some modifications included longer boxcars, larger sliding double side doors located near one end of the boxcar, or doors located on the boxcar ends.

These modifications helped, but the demand for new automobiles outpaced the railroads' abilities to build and modify boxcars in which to ship them. In 1923, the Grand Trunk Western Railroad experimented with modifying a group of 61-foot-long wood-frame flat cars to increase their capacity by adding collapsible frames to allow for double-deck operation. The concept was not perfected and therefore failed to gain acceptance. In the 1940s and 1950s, some railroads experimented with automobile loading assemblies that would lift one or more automobile above others within a boxcar for more efficient use of space within the cars. The success of these assemblies was limited due to their special use and specific size; it proved uneconomical to maintain a fleet of these assemblies that could only be loaded into boxcars from the ends of the cars.

By this time, in the United States, most circuses still traveled by rail. Circuses were major haulers of wheeled vehicles, carrying all of their vehicles on flat cars, usually behind their own passenger cars or in separate sections of their trains (basically, one train would haul the performers and employees while a second train would haul the vehicles and freight). The circus solution to loading vehicles was to use a string of flat cars. A temporary ramp was placed at the end of the flat cars and temporary bridge plates spanned the gaps between adjacent flat cars; the road vehicles were driven or towed up onto one car and then driven or towed down the train. This type of vehicle loading became known as "circus style" due to its frequent use by circuses.

It wasn't until the 1960s that the majority of railroads took the clue from circuses and started loading their own flat cars in this manner. But, loading even up to six automobiles onto one flat car left a large amount of space above the vehicles that was unused. The natural solution was to take the temporary assemblies that were used to stack and load vehicles within boxcars and permanently attach them to the flat cars. The assemblies, also called racks, created two levels on which automobiles could be loaded. To complete the flat car, foldaway bridges were added to the ends of the flat car decks to allow the vehicles to be driven the entire length of a train for loading. Building flat cars in this manner, the railroads no longer needed specialized equipment to load and unload the racks in boxcars. All they needed now was a ramp at the right height.

In the 1950s, in Germany, VW Beetle production was increasing beyond the capacity of highway trucks. Volkswagen engineers worked with German railroads to design a railroad car that was basically an extra long version of a vehicle hauling trailer. The design they came up with was able to carry 10 vehicles on one car. VW's two-level flatcar design effectively became the first autorack.

In late 1957, Canadian National Railroad (CN) introduced a group of auto carriers which represented a new innovation. The CN bi-level auto-rack cars had end-doors. They were huge by the standards of the time; the cars were 75 feet (23 m) long and could carry 8 vehicles. These cars were a big success and helped lead to the development of today's enclosed auto racks.

Autoracks quickly lengthened to around 80 ft (24 m) to increase their loading capacity. This made them about as long as the average passenger car of the time; if the cars were much longer, they wouldn't be able to operate in interchange service due to clearance issues on curves. Yet, the railroads could still do better. It didn't take long for the first three-level autoracks to appear on American rails.

The open end of a two-level autorack that is undergoing repairs.

During the 1960s, specially built auto carriers took over rail transportation of newly manufactured automobiles in North America. They carried more cars in the same space and were easier to load and unload than the boxcars used earlier. Arthur Crookshank of the New York Central Railroad is credited with having the first set of cars manufactured for use in the late 1950s.[citation needed] Ever-larger auto carriers and specialized terminals were developed by Norfolk and Western Railway (N&W) and other carriers. Also in this decade, autoracks were built in three-level configurations so railroads could haul more of the smaller vehicles of the era; two-level autoracks were still in use for vans and light trucks.

The only problem left was that the new autorack cars did not provide any protection from flying debris or from the weather. In the manner CN had developed in the 1950s, in the 1970s other North American railroads began refining their autorack cars. They began installing side sheathing to protect the vehicles from impact. Roofs were added to most autoracks in the 1980s, and end doors were added in the latter portion of the decade (both to prevent damage and to deter people from boarding the cars and riding the train within the vehicles loaded in them).

Although railroads were just beginning to see the advantages that autoracks delivered in the 1960s, most North American railroads were reluctant to invest in such specially built equipment. The Trailer Train Company, organized by the Pennsylvania Railroad and the Norfolk & Western in 1955, stepped in to ease the railroads' financial burden a bit. Trailer Train purchased the flat cars from the rail car manufacturers, and the railroads that wanted to operate autoracks purchased the racks that were installed on those flat cars. Such cars were easily spotted at trackside due to the reporting marks identifying Trailer Train on the flat car portion of the car and the railroad's logo (usually much larger) in the upper portion of the rack.

Autoracks wait to be unloaded in a BNSF Railway facility in Los Angeles, California.

This arrangement worked so well that nearly every autorack operating in the US was so owned. Trailer Train became TTX Corporation in 1991; since then many railroads have themselves purchased the flat cars on which the racks were installed and TTX has itself expanded into purchasing and leasing out other railroad rolling stock. The development of enclosed autoracks also helped make several other innovative services work well.

Railroads of today are still grappling with the problem of loading more and larger vehicles onto autoracks. One popular solution is to create a double-length car that is articulated over a single middle truck (bogie) so that each half of the car is about the same length as a conventional autorack. These cars, which can be seen in operation on many of the railroads of the western US, are brand named AutoMax cars. These cars, built by Gunderson (a subsidiary of The Greenbrier Companies) measure 145 ft 4 in (44.3 m) long and 20 ft 2 in (6 m) tall; they feature adjustable interior decks to carry up to 22 light trucks and minivans.

The railroads became the primary long-distance transporter of completed automobiles, one of few commodities where the industry has been able to overcome trucking in competition. Using the enclosed tri-level autoracks, they were able to provide both lower costs and greater protection from in-transit damage (such as that which may occur due to weather and traffic conditions on unenclosed truck trailers).

In 2004, Canadian National was as the forefront of autorack technology again, as it had been in the 1950s by using a more light-weight material, aluminum. The new cars, built by Johnstown America Corporation beginning in December 2004, are brand named AVC, an acronym for Aluminum Vehicle Carrier. 200 new aluminum autoracks promise a softer ride, a wider interior, superior door-edge protection, and a rust-free interior from older steel versions. Canadian Pacific Railway has ordered 375 of these new cars as well. The new cars built for Amtrak Auto Train service differ from those built for CN and CP; the Amtrak cars are three inches shorter in height, and use solid side panels instead of the perforated panels operated in freight service.

On December 6, 1971 Auto-Train Corporation introduced a new and innovative rail transportation service for both passengers and their automobiles in the United States, operating scheduled service between Lorton, Virginia (near Washington, D.C.) and Sanford, Florida, near Orlando.

The Auto Train offered an alternative to motorists who would otherwise drive their automobiles the 855-mile (1375 km) distance along the east coast of the U.S. For vacationers with destinations at one or more of the many popular tourist attractions of Florida, the Auto Train service offered dual features:

From the beginning in 1971 (the same year Amtrak began service on purely passenger routes in the US), a key feature of Auto-Train's new service was the use of autoracks, which were former Canadian National bi-level autorack cars acquired used. These were augmented by new tri-level auto-racks in 1976.

The privately owned service became very popular, but after 10 years of operation, and some costly attempts to expand the service elsewhere (such as a schedule between Florida and Chicago, Illinois), Auto-Train Corporation entered bankruptcy, and service ended in April 1981.

Auto Train service between Virginia and Florida was resumed by Amtrak in 1983. Amtrak, a federally chartered corporation which operates most intercity passenger trains in the United States, continued to use Auto-Train's autoracks as an important portion of its service.

In current operation of Amtrak's Auto Train, there are two trains in operation simultaneously. The autoracks normally run on the rear of Auto Train consists, which stretch over a quarter-mile, and are a familiar sight on CSX trackage along the east coast.

Today, Amtrak's Auto Train carries about 200,000 passengers and generates around $50 million in revenue annually. It is considered Amtrak's best-paying train in terms of income in comparison with operating expenses.

An Auto Train type of service utilizing autoracks and passenger cars was operated in Alaska at the Anton Anderson Memorial Tunnel through Maynard Mountain near Whittier, Alaska, which is part of the Portage Glacier Highway. Completed in 1943, with a length of 13,300 feet (4054 m), it is the longest highway tunnel and longest combined rail and highway tunnel in North America.

In the mid-1960s, the Alaska Railroad began offering a shuttle service through the tunnel which allowed vehicles to drive onto auto carrier cars to be transported between Whittier and the former town of Portage. As traffic to Whittier increased, the shuttle became insufficient, leading to a project to convert the existing railroad tunnel into a one-lane, combination highway and railway tunnel which was opened to traffic on June 7, 2000.