Look up crepuscular in Wiktionary, the free dictionary.

Crepuscular animals are those that are active primarily during twilight (i.e., dawn and dusk). 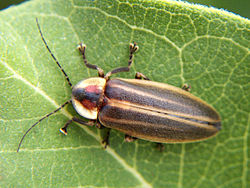 The word crepuscular derives from the Latin crepusculum ("twilight").[1] Its sense accordingly differs from diurnal and nocturnal behavior, which respectively peak during hours of daylight and dark. The distinction is not absolute however, because crepuscular animals may also be active on a bright moonlit night or on a dull day. Some animals casually described as nocturnal are in fact crepuscular.[2]

Special classes of crepuscular behaviour include matutinal (or "matinal") and vespertine, denoting species active only in the dawn or only in the dusk, respectively. Those that are active during both morning and evening twilight are said to have a bimodal activity pattern.

The various patterns of activity are thought to be mainly antipredator adaptations, though some could equally well be predatory adaptations. Many predators forage most intensively at night, whereas others are active at midday and see best in full sun. Thus, the crepuscular habit may both reduce predation pressure, thereby increasing the crepuscular populations, and in consequence offer better foraging opportunities to predators that increasingly focus their attention on crepuscular prey until a new balance is struck. Such shifting states of balance are often found in ecology.

Some predatory species adjust their habits in response to competition from other predators. For example, the subspecies of Short-eared Owl that lives on the Galápagos Islands is normally active during the day, but on islands like Santa Cruz that are home to the Galapagos hawk, it is crepuscular.[3][4]

Apart from the relevance to predation, crepuscular activity in hot regions also may be the most effective way of avoiding heat stress while capitalizing on available light.

Ocelots are active at night, especially during dawn and dusk

Many moths, beetles, flies, and other insects are crepuscular and in particular, vespertine.